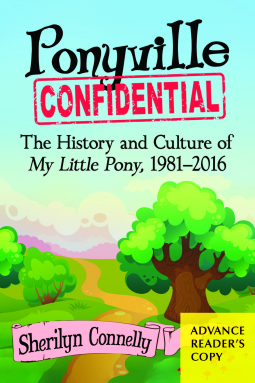 This book brought me back to my childhood, and I really enjoyed going through this trip. I’ve been a fan of My Little Pony since it began, and I hadn’t really looked at it and thought about how it started. This book really did capture the magic I had from my childhood. I thought the book was well written and had the respect for the subject written. Overall I really enjoyed reading this and would recommend this to fans of the My Little Pony franchise.

Beloved by young girls around the world, Hasbro’s My Little Pony franchise has been mired in controversy since its debut in the early 1980s. Critics dismissed the cartoons as toy advertisements, and derided their embrace of femininity. The 2010 debut of the openly feminist My Little Pony: Friendship Is Magic renewed the backlash, as its broad appeal challenged entrenched notions about gendered entertainment.

This first comprehensive study of My Little Pony explores the history and cultural significance of the franchise through Season 5 of Friendship Is Magic and the first three Equestria Girls films. The brand has continued to be on the receiving end of a sexist double standard regarding commercialism in children’s entertainment, while masculine cartoons such as the Transformers have been spared similar criticism. The high-profile fans known as Bronies are also discussed, covering the media’s problematic reaction to them and the Bronies’ response when the My Little Pony cartoons didn’t conform to their expectations.